A wonderful Rama waiting for devotees!

About a year ago, a friend of mine asked me if I knew about a temple with an 19 feet sleeping Rama near Cuddalore. He mentioned the name of the place as Vengadampatti. I searched high and low, through reams of notes I have made on must-visit temples, reference books in my library, and checked with friends and relatives in that area. None of them knew about Vengadampatti or a sleeping Rama.

The information stayed at the back of my mind and every opportunity I got I continued the search. Out of the blue, as it always happens with Aalayam Kanden, I stumbled upon a newspaper article about the Venugopalaswamy temple at Vengadampet (it was not Patti) and the 19 ft Rama.Thankfully, that article also had the contact information of the temple.

The next step was to contact the Bhattar and the Executive Officer. They mentioned the painstaking efforts  taken in renovating the temple and the support they had received from Sri Baskara Gurukkal of Germany in doing so. The EO also mentioned that efforts were now on to repair the compound wall around the temple, and renovate the Vijayanagara period Rajagopuram that is seen in the picture above.

Armed with directions to the temple, we set out. My major worry was to be able to reach the temple in day light as many parts of Tamilnadu do not have electricity for best part of the evening and night. But despite our best efforts, we were able to reach only around 5.45 pm. Construction work was going on to raise the compound wall and the temple was devoid of any visitors but us.
We were absolutely stunned by the beauty of the temple and the idols therein. A huge Garuda seated in Padmasana,wearing beautiful Nagabaranas, and meditating with folded hands welcomed us. The temple has been renovated very well, similar to what the original construction would have been. It was an eyesore to see that children have scribbled their enrolment numbers all over the walls already. 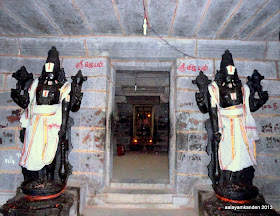 Two gigantic Dwarapalakas flank either side of the Sanctum Sanctorum where the main deity Sri Venugopalaswamy resides with his consorts Radha and Rukmani. After worshiping him and lighting lamps at the temple, which was already getting dark, we moved to what we had come looking for.

In a separate enclosure, lies the 19 feet Sri Rama on a seven hooded Adisesha, with Sita Devi and Hanuman at his feet. The sight of the absolutely handsome Rama, resting so gracefully, literally takes your breath away. 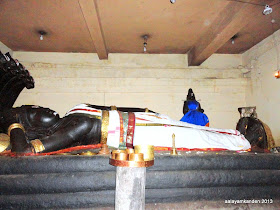 Sri Raghava Bhattar narrated the story of how Rama came to rest here, in this position. While returning to Ayodhya,Rama was passing through this Kshetra, where the Vaikanasa Rishis were doing penance. On seeing Lord Rama, they asked him to give them darshan as they would see Lord Vishnu in Vaikuntam. Pleased with their devotion, Lord Rama gave them darshan like this, with Lakshmana taking the form of Adisesha, and Sita Devi and Hanuman sitting at his feet.

I asked the Bhattar how he could say the idol was Rama and not Mahavishnu. The Bhattar explained that the idol had only two hands as Rama was human and there was no lotus emerging from the Navel as would be in the case of Lord Vishnu. He also mentioned that instead of Sridevi and Bhoodevi who are normally found with Lord Vishnu this idol had only Sita Devi at the feet of Rama.

Lord Hanuman is seen here in action, his expression willing the Lord to wake up and move on.The urgency in Hanuman's expression is because Bharatha to whom Lord Rama had handed over the kingdom of Ayodhya was waiting for his brother's return within a particular time, failing which he was ready to enter the fire. Hence Hanuman is found in an anxious posture, which is rather cute to see.

The size of the Garuda, Dwarapalakas and Vishwaksenar seem to match the size of the gigantic reclining Rama. Originally the temple seems to have had this Rama as the main deity. Over time, the idol of Rama got buried and the temple became dilapidated.

Venkatamma, the sister of Venkatapathy, the ruler of Gingee, is said to have been given this village as part of her dowry, which is why it came to be known as Vengadampet. Since she was a devotee of Lord Krishna, she seems to have installed Venugopalaswamy as the main deity at the temple. The size of both the old Venugopalaswamy and the current one is much smaller than the Rama and the other ancient deities. The idol of Rama has only been rediscovered about 200 years ago in a pond nearby and then brought back to the temple and installed in a separate shrine.

There have been several inscriptions found at the temple earlier. I am sure historians will be able to share much more information on the origin, and structure of the temple based on records from this temple if any.

Raghava Bhattar also told us that another unique feature of this temple is that it has the Avataras of all three Yugas within in. It has Rama from the Thretha Yuga, Krishna from the Dwapara Yuga and Mohini from the Kali Yuga.

Bhasmasura Vatha is said to have happened at a place called Vegakollai near Vengadampet. Since the Mohini Avatara happened there, a statue of Mohini had been placed at the Kalapeswarar Temple at Vegakollai. Bhasmasura had prayed to Lord Shiva for a boon that when he placed his hand on anyone's head, that person would be reduced to ashes. As soon as the boon was granted, Bhasmasura wanted to test it. He started chasing Shiva to test it on him. Shiva started running. After running for a long time, he became tired and could not run any more. At this point, he prayed to Lord Vishnu to help him. Vishnu took the form of Mohini, and appeared before Bhasmasura to divert his attention. She started dancing in front of him. Bhasmasura forgot all about Shiva. Enticed by Mohini's beauty, he started dancing with her. While dancing, Mohini placed a hand upon her head, and Bhasmasura did the same forgetting his boon and was instantly reduced to ashes.

The place where Lord Shiva rested due to fatigue, came to be known as Kalapeswarar temple. (Kalaipu is tiredness is tamil) and an idol of Mohini from that temple had been moved to the nearby Venugopalaswamy temple as that temple had got dilapidated. With this idol, representation of Vishnu avatara over the three Yugas is found in this temple. The idol of Mohini is damaged and hence is placed under a tree outside the temple. In spite of it, abhishekam is performed regularly and lamps are lit near it.

This temple also has seperate shrines for Goddess Senkamala Thaayar and Andal. Next to the temple is a gigantic Unjal Mandapam. Other than the Rajagopuram and the Unjal Mandapam, all other portions of the temple have been renovated. Efforts are on to complete and protect these two heritage structures as well.

Daily Aradhanam is performed from 9 am to 10 am in the morning and 5 pm to 6 pm in the evening following Vaikanasa Agama. There is an old lady and an old man at the temple who volunteer in lighting lamps and guarding the shrine. As the temple has few visitors and the Bhattar is also performing poojas in another temple at Kurinjipadi, it is better to inform him about your visit in advance, so that the temple is open and you are able to witness these awesome deities.


Every month, through the Aalayam Kanden Trust we light lamps and distribute ghee and oil to ancient lesser known temples. This month we lit lamps and distributed ghee and oil here.  I cannot explain the delight in the old lady's face when she witnessed the event. The temple has everything you can ask for - All that is required now is patronage through visitors and donations to sustain and bring back the temple to its lost glory! The Rama in this temple is like none other and all efforts must be taken by heritage enthusiasts to create awareness about the existence of this temple so that everyone can enjoy these jewels from the past! This awesome Rama is waiting to grant the prayers of all those who reach out to him!


How to reach here:


While travelling by road via Panruti, after crossing Kadampuliyur, look out for a Samarasa Sanmarga Sabai temple to your left. About 100 metres from there is a large water tank (on the left itself). Turn left here towards Chattharam. At the Chattharam junction, turn right. Vengadampet is about two kilometres from there. The temple is quite easy to find.


The temple is definitely open between 9 and 10 am in the morning and 5 and 6 pm in the evening. If you need to visit, it is better to inform the Bhattar ahead so that he will be available at that time. As mentioned in the post, it is better to visit before it gets dark, as power is resumed at the temple only at 7 pm.